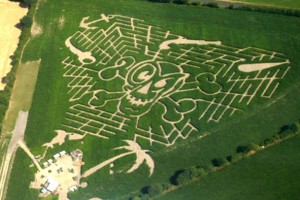 the site. It’s like a damn corn maze trying to read some blogs. And not in a “fun activity with your family” sort of way. In a “get me out of this damn corn maze” type of way.

I realize that I’m much more upset about poor navigation than most people since Columbus, but almost everyone can agree that a site with great structure makes more sense that a site with poor structure. Good structure to your website is also a plus for search engine spiders. This is something that has been weighing on my soul at After Graduation since I rebranded and relaunched earlier this year, because I wasn’t completely happy with the blog navigation options.

Then I read You’re NOT Only As Good As Your Last Blog Post from Jordan Cooper, and I think he hit the nail on the head as far as what I’ve been thinking but unable to put into words or even coherent thoughts. Blogs everywhere are at a disadvantage because they’re structured like…well…blogs. And that’s not the best option for every website, because great content gets buried to make way for new content.

Let’s look at a few examples.

Like many of you, I’m sure, I follow Mashable to read about social media news and tips. Mashable is just like every other blog in the world in the fact that they sometimes have blog posts that go above and beyond, but they typically have normal blog posts. Not bad, not even boring. Just not award-winning. As bloggers, we’re writing hundreds of posts per year, and not everything is going to change the world. That’s ok.

I also read Cracked.com regularly, just for entertainment reasons. Again, they have great posts on a daily basis and occasionally, they’ll post something above and beyond that really blogs me away.

These are both blogs, but if you take a look at the sites, you’ll notice that Mashable looks more like a typical blog while Cracked.com does not. Why? Because Cracked.com has realized something important – the timestamp on their posts doesn’t really matter. Whereas Mashable covers industry news, Cracked.com’s blog is mostly evergreen material. That doesn’t mean that old posts on Mashable are never relevant, and that doesn’t mean that Cracked.com never talks about anything time-sensitive, but if you on a sliding scale, Mashable is near the “time-sensitive” end and Cracked.com is near the “evergreen” end.

The traditional look to a blog is perfect for time-sensitive topics. This can mean news, but doesn’t necessarily have to be. For example, if you run a blog about gardening, you probably talk about topics as they’re relevant to the growing season or if you run a blog about books, you probably review new releases. The problem? Most blogs are far closer to the evergreen side of the scale, yet few has adapted. Almost everyone uses a Mashable-type of structure, rather than a Cracked.com “magazine” look.

Take a look at your content. Is most of it as relevant today as it was months or even years ago when it was first posts? Someone who runs a tech blog might say no, since their old content is out-of-date. Someone who writes a fashion blog might say no, since trends change over time. But for someone like me, blogging about freelance writing at After Graduation, the answer is yes. Almost all of my posts are as relevant today as they were when they were first posted.

I suspect that most bloggers fall in the 50-50 range. That’s where I’d put this blog, actually. Half of the time, your posts will reference current events, cover news stories, or otherwise make the most sense soon after being posted. The other 50 perfect of the time, the posts are evergreen and can last for years. When this is the case, I don’t think there’s a right or wrong answer to the type of structure you use, as long as you have clear navigation in the form of categories, tags, and the like.

But I think that a number of you out there are like me and my own blog, posting mostly evergreen content. Like Jordan’s post says, it doesn’t really make sense to have your work buried with a chronological set up. That’s the problem I’m struggling to solve right now on my own site – is the typical blog structure a good idea?

I’m beginning to think it is not. You can have a site map and you can have a “best of” or “popular” page, but that doesn’t change the fact that many good articles are getting buried for the sake of updates. At the same time, a more static website doesn’t necessarily make sense either. After all, you want your regular readers to be able to find new posts quickly, and if you don’t have a blog set up at all, time-sensitive posts make no sense.

Right now, I’m developing a new plan for After Graduation that combines an article bank for my evergreen posts with a normal blog for my time-sensitive posts and journalism posts. I’m interested to hear your thoughts on the matter, though. Is a typical blog structure working for you? Why or why not?

Allison Boyer is a writer for BWE’s blog and the owner/manager of After Graduation. She doesn’t actually have anything against corn mazes.