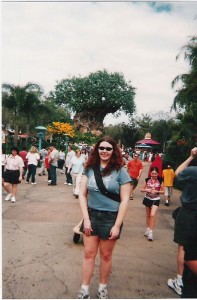 When I first started writing for the NMX blog (BlogWorld at the time), it was just after I spent a week in Orlando, which included two days at Disney World. Needless to say, I had Disney on the brain, and lucky for you all I jotted down a few ideas for blog posts that had hit me while on vacation.

Yes, I know I have problems when I’m brainstorming blog post ideas and monetizing techniques while at the Magic Kingdom. Don’t judge me.

I’ve been to Disney World in the past, but something that is so striking to me every single time I go is just how good this company is at getting you to buy crap. Seriously. I came home with about $30 worth of junk that I not only don’t need, but I don’t even really want. And remember, it’s just me; I don’t have kids nagging me to buy even more useless tchotchkes. There are products for sale packed into every corner of that darn park, and instead of becoming blind to it, as is often the case with overexposure, people just buy more.

So why does Disney items sell so well? Why do people really care about the approximate 231,390,908 gift shops in the park? It’s not just about wanting a single souvenir to take home – why does nearly everyone leave with bags and bags of Disney crap?

The first thing that Disney does, better than any other park in the country in my opinion, is get you excited. You’ve paid a park admission fee, so it isn’t like you get to go on rides for free, but when you’re standing in line it seems like what you’re getting is free, since you aren’t handing someone money to board a roller coaster or boat or whatever.

What you get for “free” is pretty amazing. Even as an adult, you can imagine that the animatronics and special effects are real. Some of the attractions allow you a peak into movie sets. Some allow you to step into your favorite Disney movies. Some even have allow audience participation, which puts you in the middle of the show. All of this builds excitement. If you’ve never been to a Disney park, let me assure you – it is not just for kids and it’s not like typical run-of-the-mill amusement parks. You’ll get excited about their attractions no matter what your age. You leave nearly every attraction giggling and giddy, or at least, I did (and I’m pretty sure most of the adults around me did as well).

This is the kicker – at the height of your giddiness, Disney does what I call “The Dump” and shoots your into one of their gift shops. They aren’t just nearby; in some cases, you exit the attraction through a gift shop. And not just any gift shop – a gift shop specifically themed to sell items relating to the content you just saw.

In a split second, visitors to the park become consumers. Those aren’t Mickey ears you’re wearing, it’s a sign that hey, I’ll buy anything if I’m tempted, like ridiculous mouse ears even though I’m a grown man. You had so much fun on the ride that you can’t possibly leave without an item to remind you of it. You’re so excited that you want to take home items for your family so they can share in the excitement. You don’t just want to buy. You need to buy.

Disney is sneaky, too. They have theme gift shops, but within each, they also have items that are kinda-but-not-really related. For example, in the Pirates of the Caribbean gift shop, they had a section of Nightmare Before Christmas items. Ok, he’s a skeleton, but that’s about the only link between the two themes. It doesn’t matter. For those guests who missed the excitement, who didn’t really have a high level of enjoyment for that particular ride, there are other popular niche areas of the store to explore while the rest of the family is buying pirate hats and eye patches.

Because you need an eye patch. You suddenly are overwhelmed at the thought of how you survived this long without one in the first place.

I digress. The point is that Disney hits you with a hard sell at the moment when you’re most emotional excited about the theme. They know that if you walk out and move on to the next attraction, it is unlikely that you’ll come back to buy something. At the very least, if you return, you’re probably only going to pick up something specific, like a single small item for a nephew that’s interested in pirates. You aren’t going to make emotional purchases.

You might be wondering why I’m going on and on about Disney gift shops, but those of you who have been reading my posts for a few months now know that I always have a point, even if I take a long, rambling road to get there. Today, the destination I hope you’ve realized by now is this: If you excite your readers with content first and then try to sell them a product then and there, they’ll be more likely to buy.

Essentially, you should be dumping your readers in a gift shop of sorts on your own blog.

People are already doing this, in some cases, without realizing it. Think about the last time you posted a review on your blog, especially for something you really liked. At the end, you likely gave the reader links to purchase the product or service, and hopefully you are an affiliate so that you make a cut on that money. You weren’t psychoanalyzing your readers to find out when they’d be most emotionally invested in the potential to buy – you just did what makes logical sense. You read how much I liked this product. Here’s a link to go buy it.

Let’s say you posted a review and then posted a separate link to buy a few days later. Even people who read your review initially won’t be as enticed to buy as they were immediately after reading the review. You could have converted sales, but by not dumping your readers into a gift shop when they were most excited, they got distracted and lost interest or spent their money elsewhere.

If you’ve ever attended a free webinar, you’ve probably noticed the same gift shop dump mentality. People with a product to sell will spend an hour or two getting you excited, and then they’ll whip out the “buy it right now” hard sale at the very end. And you know what? People buy. They need the product more then they’ll ever actually need it ever again, even when they have it. It’s the emotional response we have as human beings.

That’s the gift shop dump mentality. Disney uses it. Almost every successful six-figure blogger I know uses it (even if some don’t realize it). You can use it too.