Perhaps calling nasty bloggers “the dark side of the Internet” is a little melodramatic. I’m a melodramatic type of gal, I suppose. Recently, I’ve seen communities being torn apart over issues where they just simply don’t agree, and I have to wonder – is it worth it? Is getting our opinion out there worth losing friends or losing the respect of readers?

The answer to that question certainly isn’t easy. 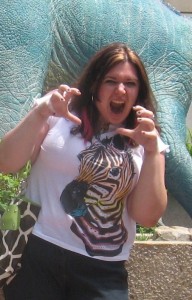 This is my angry face. Internet comments, roar!

On one hand, I do fully believe that it is important to stand up for what you think is right. Right now, the whole WordPress versus Thesis debate is raging in this community, and a lot of bloggers are coming out of the woodwork to weigh in on the topic, myself included.

Unfortunately, it’s getting nasty. Strike that…it is nasty. We’re lucky enough here at the BlogWorld Expo blog to have awesome readers who know how to disagree respectfully (and even productively, since I’ve been getting ideas about possible solutions to the WP/Thesis problem). Not every blog has that kind of upstanding reader. Certainly, on Twitter, we’ve seen the lowest common denominator of the Internet flinging mud on both sides. And really, “mud” is a polite term for some of the tweets I’ve seen.

I’ve said it before, and I’ll say it again – the anonymous nature of the Internet does not make it OK for you to be a jerk. Disagreeing respectfully is a must. We’re all adults here, after all. And, as writers, most of us can agree that freedom of speech is a good thing, even though it means extending that freedom to people who have differing opinions. It’s important to remember that this freedom comes with a responsibility to act like a mature adult, not a high school drama queen or, worse, screaming five-year-old.

The WP/Thesis debate is not the only one I’ve seen get ugly recently. I also just saw bloggers get totally out of hand in a relationship-based blogging community where people were debating about consent, dressing in a sexy manner, accountability when drinking, leading men on, etc. It turned into a giant mess, and there seemed to be no voice of reason standing out saying, “Wait a minute. We’re all adults. Let’s stop calling anyone with a dissenting opinion stupid.”

These are just two examples of the types of nasty blogging I see every single day. Even people that I respect get carried away sometimes, taking rude comments about disliking someone/something/some idea a step too far. It’s a fine line between voicing a dislike and bashing someone in an immature way.

As bloggers, I personally believe that we have a responsibility to behave with a little more class than we sometimes do. I’m guilty of this just like the rest of you. We get riled up about something that makes us passionate, and we explode, either by writing a strongly-worded blog post that goes too far or name-calling in a disrespectful comment on someone else’s website.

The real problem here lies with bloggers who forget to come back from that angry, nasty place, bloggers who perpetuate the negativity, and bloggers who don’t even have logical arguments anymore, just hating to hate.

I’m not suggesting that we sit around a campfire singing Kumbaya or have regular group hugs or something. Part of what makes a blogger a good blogger is his or her ability to voice an opinion. I am saying that it sometimes pays to take a step back from an angry, hurtful situation. I like to use the three-hour rule: when something makes me really upset, I wait three hours before writing a blog post about it or commenting on someone else’s blog post. Often, I’ve found that I’m not nearly as passionately mad about something three hours later; it was just an initial gut reaction. After some time to cool off, I can write a rational response.

In closing, here are my pleas to you, dear bloggers:

In short…be a grown up. Don’t be afraid to apologize if you’ve let something get out of hand, and above all, learn to let things go. Yes, even when you feel passionate about a topic. Letting something go doesn’t mean that it doesn’t matter, nor does it mean that you’re conceding to the other side. It just means that you’ve exhausted the debate. You can talk in circles forever, getting continually nastier, or you can move on to other topics.

The WP/Thesis debate isn’t going anywhere – and that’s ok. The same is true of other debates that are being hashed out between bloggers or readers. Just know when to hang your hat…or more accurately, when to hang your hate. As bloggers, we can make the Internet a more hostile place, or we can make it a more valuable, productive place. The choice is yours.

Allison Boyer is a writer for BWE’s blog and the owner/manager of After Graduation. She’s beginning to think that regular group hugs wouldn’t be a bad thing…and a blogger camping trip? Now that just sounds like fun.