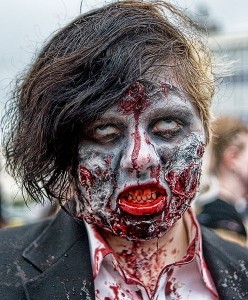 Most bloggers have allowed a blog to die at one point or another. Maybe you weren’t experienced enough to understand blogging like you do today, so you had no traffic or weren’t making money. Maybe the idea was a dude. Maybe you got wrapped up in other projects and just didn’t have time anymore. Regardless of the reason, now might be the perfect time to revive that dead blog. That’s right – I’m recommending that you zombie-fy your website.

A zombie blog really does need your brain. The only way to successfully revive a blog when rigor mortis has already set in is to understand why it didn’t work out in the first place. Blogs don’t just fail. Why did you stop writing? If you don’t address the initial problem, you’re going to fall into the same hole once again, and after you’ve killed a blog for the second time, it’s down for the count. So, unless you’re ready to shotgun your site in the forehead, plan out your approach carefully.

You can approach blog revival in two ways. The first, I’ll call it the “fast zombie” approach. You know, like the creatures in 28 Days Later that run and seem to have super human abilities. If you take the fast zombie approach, you’re getting your dead blog back on it’s feet quickly, running as though it never died in the first place. This is the best revival technique if there was nothing wrong with your niche or content in the past and you simply want to start blogging again.

Of course, there’s also the “slow zombie” approach. You know, the Dawn of the Dead zombies who can be escaped by briskly walking in the other direction. This approach takes more time and planning on your part because you’re not just starting to blog again; you’re actually going in a new direction. The old content is still relevant, but most of the posts giver advice specifically about freelancing. This type of revival absolutely takes longer and is more difficult, but I’m a sucker for traditional slow zombies. What can I say? I’m a Romero fan.

Rule #1 of the zombie apocalypse: If you get bitten, shoot yourself in the head. One nibble is enough to turn you into a snarling brain-lusting creature too. No, nobody has a cure. No, you can’t hold on. No, you aren’t going to be the one to beat it. If you get bitten, you will die.

Work with your zombie blog carefully to avoid getting bitten. In other words, don’t let your blog kill you. Sometimes, a blog died for a reason – it just wasn’t working. That’s okay. Even if the idea was a great on, maybe it just wasn’t working for your lifestyle. Almost any topic can be successful, but there are a lot of unsuccessful blogs out there. It is important to step back and realize when something just isn’t working. Put your time and effort into ideas that are succeeding, because it is easy to kill yourself just by being to stubborn to give up on a bad idea.