Daniel Gray is the founder and editor-in-chief of MPGomatic.com, “where mileage matters” … the Internet’s independent authority on fuel efficient vehicles and the revolution in transportation. A veteran tech writer, Daniel has a penchant for both the untold tale and the long tail. He began his Internet career in 1995 and ceased felling trees in 2004 to focus his efforts exclusively online. Daniel has also been a BlogWorld & New Media Expo speaker! Here is his story:

The concept of making a living as a full-time independent blogger is a dream to many and a reality to few. I’ve been living it for well over a decade. 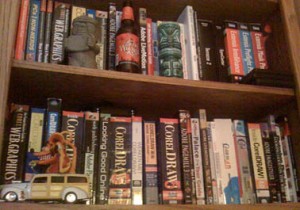 I worked my last conventional job in the mid-to-late nineties (coincidentally, my first Internet job). The job entailed daily posts and from-the-floor trade show reports. I was blogging away back in 1995, long before the term was coined.

The early days were more than a bit crazy.

We had no real software, no content management system. Everything was hacked out in HTML by hand in whatever text editor we had at hand. Forget about wireless broadband in the hotel room (or anywhere else, for that matter) … We had to literally pull wires out of the wall on our first overseas trip, to attach alligator clips to the phone lines in the hopes of hearing the happy screech of the 56K modem.

The pace was hectic.

In addition to working a full-time job, I was moonlighting, writing computer how-to books with conventional publishers. 72-hour weeks were the norm. I was burning myself out, thankfully still young enough to endure the pace.

Things changed dramatically when my employer closed up their local office. I stayed on as a contract employee for a while. I looked forward to being able to strike out on my own. The process of telecommuting taught me how to operate independently,

When the doors closed on the contract work, I made the conscious decision to take an initial leap into gainful unemployment. I focused on my somewhat conventional writing career. It was a leap of faith.

Friends and family would ask what I was doing to keep the mortgage paid.

“You don’t have a job?” they’d ask, quickly followed by the next question. “What kind of books?”

Sensing their skepticism, I’d lay out the picture.

“You know that big section in Barnes and Noble that’s filled with books on how to use Microsoft Word and all those other confusing software programs?”

The lights always came on, with the typical response.

“You make a living at that?”

Indeed, I made a solid living at that.

I got in when the getting was good and got out when the business was no longer as fun nor as profitable. Scoring contracts with the publishers was one thing. Return on my investment of time was another.

Through the process of researching and writing “The Complete Guide to Associate and Affiliate Programs on the Net,” for McGraw-Hill back in 1999, I learned how to operate without a net while earning my income from the net.

Writing a book is quite an intensive process. The weight on an author’s shoulders can be excruciating. Chapters are milestones, dragged to the side of the road through great effort.

Blog posts, by comparison, are pebbles, cast into the pond to create ripples.

As friends and family became comfortable with my earning a living as an author, I sought to change things, once again. While I put twenty conventional books to bed over the years, I killed my last tree in 2004.

Folks would ask about my latest book and I’d have to disappoint them once again, by explaining that I’d made the leap to writing exclusively online.

This would, of course, bring on the inevitable, “you make a living at that?”