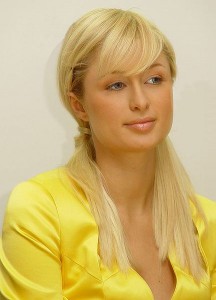 Did you know that Paris Hilton has won awards for coining the phrase “that’s hot”? Seriously. While your knee jerk reaction might be to wonder what is wrong with humanity, the truth of the matter is that this tabloid queen is consciously doing something that we all should be doing as bloggers: building a brand.

It isn’t an accident that Paris portrays a certain sexy ditziness wherever she goes. It’s actually a really smart business move. She’s selling books, purses, jewelry, jeans, CDs, and more on “that’s hot.” Ok, it’s more than just a phrase – but that’s part of the package. You may not like her, but you certainly know who she is and what she’s all about.

What about your target market – do they know who you are? Do they know what you are about? It’s more than just your blog topic and facts about you. You’re a mom who blogs about cooking? That’s awesome. What makes you different from every other kitchen-loving mother? If you’re a tech blogger with a love for Star Trek, what makes you different from every other nerd* out there?

Some bloggers do this personal branding thing really well. You know that they’re all about the moment you start reading their sites. Not everyone will like them, but that’s ok. After all, most of people who don’t like you aren’t going to buy your products or otherwise financially support your site anyway.

Branding makes you stand out. People come back to your site because they remember you. They subscribe to your ten billion lists. They retweet your post links even before they’ve read the post. They comment. They feel like they know you, which can be a little creepy if you ever meet at a conference, but hey, some awkward hugs are not too much for a faithful reader (as long as they don’t start baking pies for you made with their hair).

Creating a blogger brand doesn’t mean you lie. In fact, that’s pretty counterproductive. Readers can sniff out bull pretty quickly, and once you’ve been outed as a turd, you will always be a turd. You don’t want to create some character that isn’t the real you – you just want to highlight your more awesome attributes, playing them up a bit to create your own brand.

Yes, there are multiple sides to every person. I’m sure Johnny B. Truant has days when his Internet doesn’t feel so awesome, I’m sure Darren Rowse has days when he’s sick of blogging, and I’m sure Chocolate Covered Katie has days when she just wants to order take-out. Heck, I’m sure even Perez Hilton has days when he’s humble and kind to people. Ok, maybe that last one is a stretch, but most people have more than one characteristic that makes up their personality. This is a business, though, and these guys/gals have hats to wear when they interact with others online. It’s why they’re memorable.

What makes you memorable? Tune into that, and you’ll be much more likely to build a following and actually make money with your blog. Sometimes, being a little like Paris Hilton isn’t a bad thing.

*I say “nerd” affectionately, as someone who spends way too much time playing video games.