It’s been about three weeks since Keith Elam, one of the most accomplished artists of my generation passed away. 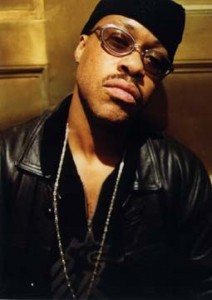 As one-half of Gang Starr, Elam was truly a Gifted emcee who pioneered an ill poetic street corner philosopher’s eloquence not yet heard prior. Between his Gang Starr catalog and his groundbreaking Jazzmatazz work, he proved to source of seemingly Unlimited Rhymes. And his willingness to discuss everything from the writing process to manhood to parenthood to politics to crime made his lyrics truly Universal.

Looking back, April 19, 2010 saw the passing of perhaps the only non-east Indian who could rightfully call himself a guru with a straight face. Elam’s death also got me thinking about all the other so-called gurus out here…

He had a book, a title, and full schedule of speaking gigs and media appearances to validate his self-inflicted gurudom.

Now, the easiest thing would be to insult, slander folks like this. That’d be the one-off sureshot that would garner plenty of RTs, comments, and e-daps. But instead, I wanna try something different, beginning with a question:

What if all the gurus, particularly those of us in marketing, PR and social media, just said—out loud: 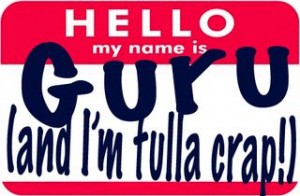 What if all the so-called trend-spotting gurus and trendsetting fashion gurus stopped for a second and said, “Mr. & Mrs. Talk Show Host: To be perfectly honest, I just wrote this book to get a few speaking gigs and make some quick cash. But to answer your original question, ‘I’m really not sure.”?

What if we all told our clients we’re not infallible gurus and added, “at this stage of the game, no one is. The space is just too new and too fluid for anyone to be claiming otherwise. We’re all students learning as we go. And the fact is, what worked last year, or even last week, might not work tomorrow. But we’ll do our best.”

What would happen to all the gurus then?

Would billings get cut? Would contracts be lost? Would our LinkedIn connects turn on us? Would we lose followers? Would we get less sex?

Would the conference circuit dry up due to a lack of “rockstar panelists,” most of whom would’ve long since admitted that they’re really no so hot after all?

Seriously, what would honestly happen if all the gurus all took, let’s say: 6 months… or 60 days or even 6 days and just shut up—

And by “listen” I mean, no more whitepaper decks. No more self-aggrandizing tweets and blog postings. No more “ain’t I a genius” podcasts. No more keynotes or panels that invariably devolve into just how forward-looking and ahead of the curve you and your company are…

In fact, no more anything that doesn’t begin and end with listening.

What if, god forbid we all listened to people who didn’t look like us? Listened to people from different cultural/ethnic backgrounds. Keith Elam was the only black guru I’ve met with any real following in the last 20 years. There’s something perversely ironic about the fact that superficial appearance seems to be an integral part of being a guru. As if people of color can’t be authorities on anything beyond certain musical genres. So what if we listened to ‘those’ people, too?

Listening. What if we all just listened…

Now let’s be clear: this is no swipe at actual experts or conferences that feature them. I wouldn’t be part of BlogWorld if i thought BWE was about that. And fter 3 years of knowing Dave and Rick, I can safely say that as a matter of a business model, they don’t want the type of folks this piece is aimed at involved in BWE in any way.

Instead, this piece is meant to challenge some of the hustlers and loudmouths amongst us who are so busy patting themselves on the back, yelling into bullhorns and looking for the next buck that they never ask, “What do I actually know? What am I actually contributing?”

I mean, they still did their jobs—taught classes, shopped, all that… But they didn’t talk. They just listened. If they had something to say, then wrote it down and passed notes. It was surreal. (Especially once you read some of their notes.)

I wonder if all us gurus could do that…

I’m gonna try it myself and see how far I get. Something tells me there’s a whole other world out there once I stop pretending I know everything.

Meanwhile, I encourage you all to check out Guru’s work with Gang Starr and Jazzmatazz. It’s good listening.

Hadji Williams is not a guru. He is a longtime ad industry vet, writer, social media junkie. He’s also the Entertainment Track Coordinator for BlogWorld2010.  He’s at: hadji@knockthehustle.com and @blackcanseco (This also marks the last time he refers to himself in the third person.)