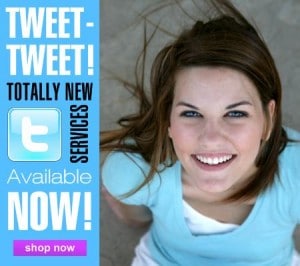 We’re living in a world where the more people you’re connected to on the internet, the more successful you are most likely going to be when it comes to your business enterprises.  The problem for a lot of people, however, is that they just aren’t connected to that many people, and getting more of those connections can be a real pain.

Take Twitter, for example, the way it works is that you follow people’s Tweets that you are interested in, and in return, other people can follow you if they are also interested in you.  The more followers you have, the more people instantly hear exactly what you’re doing, exactly when you’re doing it.  For businesses, or someone who’s trying to market themselves or a product, the ability to reach a ton of people can be priceless…or is there a price?

Looks like there just might be, and we just caught wind of a new service called uSocial that actually offers up packages to help you boost your followers.  Yes, you heard me right, they have a service that helps you suck in and capture huge increases in Twitter followers so that more people are hearing from you, about you, and what you’re trying to market.  To this, I have just one word in response:  Wow.

I am not saying it’s not a great idea, because it really, really is, but I’m just saying Wow.  It seems amazing to me that we’re reaching points where we have to pay for followers.  What’s next, paying for Facebook friends?  The whole idea of a social network, to me, is that you’re socially building your network with people you know and interact with on some level.  Granted on Twitter we’re not always following people we know, and sometimes we even follow celebrities that interest us but still, paying for a package to include more followers just seems, well, odd.  The day we pay for Facebook friends, is the day I drop out of social networking altogether!