This morning we sent out what can only be called a traditional press release announcing the dates for the 2009 BlogWorld & New Media Expo in              Las Vegas (October 15 – 17). When I woke up this morning to check Twitter this is what I found: 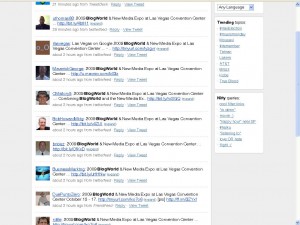 22 people so far and counting who linked to the press release via Twitter.

Three full pages of results on search.twitter.com. Then there is the more traditional pick up. Like Market Watch (which is the post most people linked to) and the post at Yahoo Finance.  By my standards that’s a successful press release and the day is young.

So we send out a traditional press release and generate a pretty good amount of buzz on Twitter because of it. This isn’t new news by the way. We announced the dates on our blog months ago and have been tweeting about it and sending out messages to our Facebook group for months.  So don’t these results go against everything the social media experts have been telling us for the last couple of years?

I believe in new media as much as anyone and love everything it has done to change human communications and still believe we are at the very beginning of this revolution, but as I keep reminding my new media friends; New media and old media will continue to converge. This will not be a take over of one medium by the other.

Or am I dead wrong?