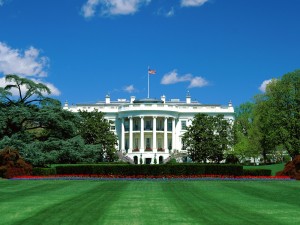 Looks like the White House is going 21st century, in a very big way.  We all knew during the campaign that Obama was a bit more advanced than any other presidential candidate in history when it came to his embracing and utilizing new technology.  That trend is continuing as the White House made a fairly large announcement recently.

That’s right, the White House has officially announced that they are big-time players in the social networking world, as they now have a blog up on Facebook, MySpace, and Twitter…the big 3.  Pretty much the only question we’re all left wondering is this:  Will the President himself be tweeting?!

Here’s what the White House team had to say about their baptism into social networking:

“Technology has profoundly impacted how — and where — we all consume information and communicate with one another.”

True.  True.  It only took about 2 hours for the Twitter page to notch over 2,000 followers and at the time of this post, they’re over 38,000.  So far their updates have covered everything from swine flu to health care, to tax havens.  If you’re into the comings and goings of the U.S. Government, we suggest following.

The bottom line is, with the White House also maintaining “an active presence on Flickr, Vimeo, YouTube and iTunes…” they’re fully immersed in social media.  The question is, how will the White House respond when negativity starts popping up, after all, the internet is far from a “positive only” place.  How will the White House deal with any and all animosity on their pages?  Will freedom of speech be upheld or will the almighty censorship rear it’s ugly head?  Time will tell.