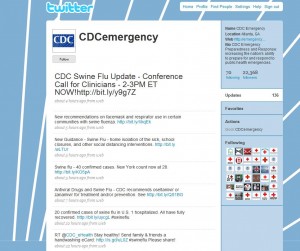 Last week we discussed briefly how Twitter was rapidly becoming much more than just a place to find out who’s doing what, when, and why, and shifting into much more of a conduit for information.  Today, in the midst of a nation-wide pandemic scare, we’re learning just how true that really is.  Twitter, it turns out, is becoming the conduit for information, to the point where even the CDC is turning to its services.

That’s right, the Center for Disease Control is actually using Twitter to spread as much vital information as possible about the spread of this nasty flu that is claiming the lives of a great deal of people in Mexico and even making its way into the United States.  According to CNet:

“The CDC is using Twitter to spread the word on how not to spread or get swine flu. The CDC has several Twitter accounts including @CDCemergency, which is posting new recommendations, bulletins on confirmed cases, and information on antiviral drugs and other ways to deal with or prevent the disease. “

Amazing how far it has come and amazing how far it looks like it could go.  When the Government of a country starts using a social networking service to broadcast vital information to its citizens, pretty sure you’ve got something fairly important on your hands.  The only questions left to really answer is what other uses will come, and how else the service can be used.

Could this be a potential replacement for the Emergency Broadcast Station?  Could this replace that annoying test we’re all so used to hearing interrupt our nightly television shows?  Time will tell…