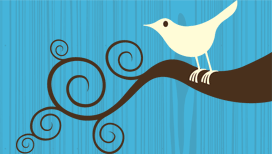 From Twitter’s humble start as a way for you and all of your friends to update each other on what’s going on, where you are, what you’re thinking and what you’re doing, it’s hard to believe where things have currently landed.  A year ago, would you have believed that some of the most popular celebrities in America would be not only using Twitter, but championing it and spreading a huge amount of their news on the service?

Would you have believed, only a year ago, that some of the most major and popular news stories were literally broken on Twitter?  No.  Probably not.  The bottom line is, over the last year, Twitter has shifted from a small, personal place to update your own social networking statuses, to a full blown hotspot and conduit for information.  Twitter has rapidly become THE place to go for any and all things information…from breaking news, to the actual pulse of this world, it’s hard to argue against it.  Everyone from Shaq to Oprah to the FBI to President Twitters, so when you want or need information that’s absolutely up to the minute, why would you go anywhere else?

“…isn’t just about celebrities or the silly anymore. It’s about real information, in real time…Sometimes that can be tweeters telling people about a shooting in their town, or about who was arrested overnight and is now in the county jail. Or letting residents know about severe weather headed their way.“Twitter is a scanner. It’s a scanner of life, scanner of the country,” said Jen Reeves, an expert in new media and a professor at the University of Missouri School of Journalism.”

We couldn’t agree more.  Fast forward 10 years from today and the need for major newspapers or even yes, the News, might be completely gone.  Why listen to a reporter’s second-hand report of a situation when you could hear directly from the people that were there and actually witnessed what happened?  The time is coming…the time is now.