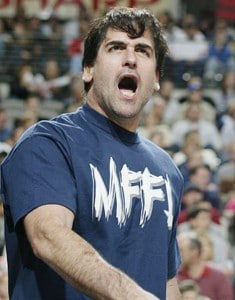 I guess if you’re as rich as Dallas Mavericks owner Mark Cuban, $25,000 really isn’t that much money to lose.  If you’re like me or the rest of America it is, and it begins to make me wonder just how responsible we’re all going to be for the comments we make on Twitter, in our status updates on Facebook, or any of the other micro-blogging services out there.

If you didn’t hear, Mark Cuban was indeed fined after criticizing the referees and some of the calls, and lack of calls that were or were not made during last Friday’s game against the Denver Nuggets.  Cuban made the comments to his fans and followers on Twitter, and it looks like the NBA is officially tweeting back, to the tune of a giant fine.  Oops.

Apparently, Cuban is “fine with it” but it does bring up bigger questions as to just how responsible people should be for the tweets they post, or the statuses they update on other social networking sites.  This could open the door to an entire new world of libel suits that could potentially take place all over Twitter.  We’ve heard reports of other cases that are popping up that combine Twitter and libel, but the question of just how responsible people are, and the weight of that responsibility have yet to be completely answered.

Look for a great deal more of these types of suits, fines, and irritations to pop up as the popularity of all of these services continue to boom.  Where will it stop?  That’s the burning question.